Go-back-n was introduced because the ‘stop-and-wait protocol’ was not that efficient as the sender can send only one packet at a time and has to wait to transmit the next frame until the previous frame is acknowledged. In this way, the stop-and-wait protocol wastes the channel bandwidth and even increase the round trip delay.

Go-back-n ARQ protocol is a sliding window protocol that uses the concept of pipelining. In go-back-n, the ‘N” determines the size of the sender window. The value of N defines the number of frames that can be sent while the sender is waiting for the acknowledgement. The value of N is always greater than 1 else it would behave in a stop-and-wait manner.

The frames at the sender side are numbered sequentially. In go-back-n, the sender can buffer N frames whereas the size of the receiver window is 1 which means the receiver can buffer only one frame at a time. However, there can be multiple data frames and acknowledgement in the channel at the same time and the sliding sender window can also slide by one or more frames at once.

If the sender does not receive an acknowledgement before the corresponding timer expires the sender retransmit all the frames in the current sender window. While if the receiver receives a corrupted frame it silently discards that frame without taking any action this results in the expiration of the corresponding timer at the sender side which lead to retransmission of frames in the current sender window. That’s why it is referred to as an automatic repeat request.

Working and Example of Go-Back-N

Let us understand the working of go-back-n with the help of an example. Consider that the sender has 16 frames to transmit. The first thing is to provide a sequence number to the frame so that each frame has an independent identity. 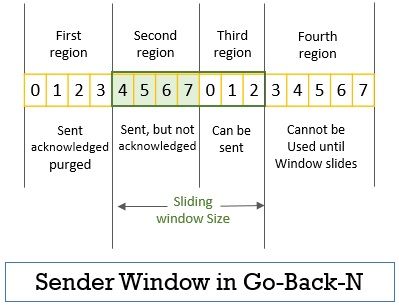 Depending on the number of acknowledgements arrived the sliding window can slide one or more slots toward the right. Consider that the sender has received acknowledgement for frame with sequence number 4 then it will slide only one slot towards the right.

If the sender receives two acknowledgements for the frame with sequence numbers 4 and 5 then it will slide two slots towards the right.

In go-back-n, the size of the receiver side sliding window is 1 which limits the receiver to look for the arrival of a specific packet. The receiver in go-back-n accepts the packets sequentially. If it receives any packet out of order then it discards those packets which are later retransmitted by the sender.

Now let us understand the working of go-back-n step by step with the help of the figure below.

The sender sends frames 0, 1, 2, 3 while waiting for the acknowledgement of the first outstanding packet i.e. 0. However, the sender sliding window covers the sequence number of the frames from 0 to 6 as the sliding window size here is 7.

The frames with sequence numbers 0, 1, 2, and 3 are the outstanding packet means these frames are sent and the sender is waiting for the acknowledgement whereas the data for frames 4, 5, and 6 is yet to come from the sender’s application layer.

After sending packet 5 the sender receives the acknowledgement for packets 1 and 2 which makes the sender sliding window shift by two slots covering sequence numbers 0 and 1.

When the timer for acknowledgement of packet 3 expires the sender has to go back and resend all the outstanding packets i.e. packets 3, 4, and 5.