What is Data Link Layer?

The data link layer is a layer in the networking model that transforms the raw transmission facility (Hub, Repeater, Cables, Modem, and Connectors) provided by the physical layer into a reliable transmission link that is responsible for node-to-node or hop-to-hop communication.

The data link layer accepts the stream of bits from the network layer and divides them into manageable data units that we refer to as frames. Now to each frame, the data link layer adds a header that specifies the addresses of the sender and receiver of the frame.

Thus, we can say that using the services of the physical layer data link layer can send and receive the data bits over the communication channel. It provides a well-defined interface to the network layer, deals with errors while transmission, and regulates the flow of data to synchronize the communication between sender and receiver.

Then the physical layer of the destination machine passes these data bits to the data link layer there so that they can be handed over to the network layer.

The design issues of the data link layer vary from protocol to protocol for the following reasons:

In this scenario, the source machine delivers data frames to the destination machine without expecting acknowledgement from them. The most common example of unacknowledged connectionless service is Ethernet.

In Ethernet, the sender and receiver do not establish any logical connection between them. Neither receiver provides any acknowledgement for the received frames. In case any frame is lost, the sender does not make any effort to detect or recover the lost frame.

Note: This kind of connection is appropriate where the error rate of the channel is minimal.

With this kind of service, the sender and receiver initially establish a logical connection between them. Then each outgoing frame is sequentially numbered, guaranteeing that each frame will be delivered only once and in the right order. Once all the frames get delivered, the sender and receiver release the connection between them. The most popular example of this kind of service is long distance telephone circuits.

To reduce the bit error rate, the physical layer adds redundancy to the signals. But that doesn’t guarantee the bit of stream received at the destination data link layer is error-free. So, it becomes the responsibility of the data link layer to detect and correct the errors.

Now, these frames can be of two types fixed size and variable size frame.

In fixed-size frames, we do not have to define any boundaries in the frame, as its size itself acts as a delimiter.

The character-oriented approach was popular when the data link layer use to exchange the text information. In this approach, the data exchanged used to be of 8 bits and the information that the header and trailer contain should be multiple of 8.

Nowadays, it is not limited to the exchange of text. We are exchanging graphs, audio and video. The character used for the flag could be a part of the information exchanged. So, we came up with a new strategy, byte stuffing.

Now when this escape character is encountered at the receiver end, it will simply remove this character and treat the next character as data only. Till it encounters the final delimiter, i.e. flag. 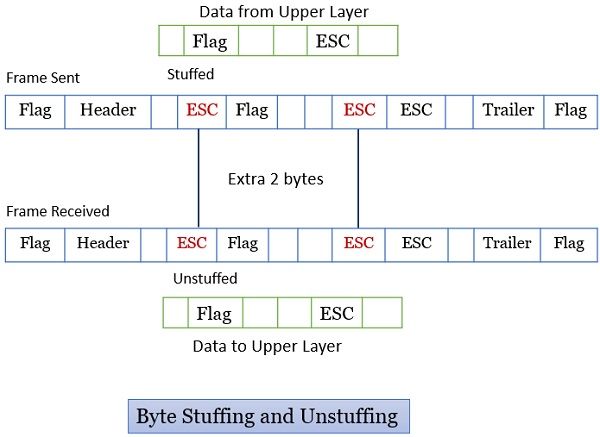 However, the character-oriented approach is losing its grip over framing concepts, as nowadays, the universal coding system has 16-bit or 32-bit characters. That’s why we have to move towards the bit-oriented approach. 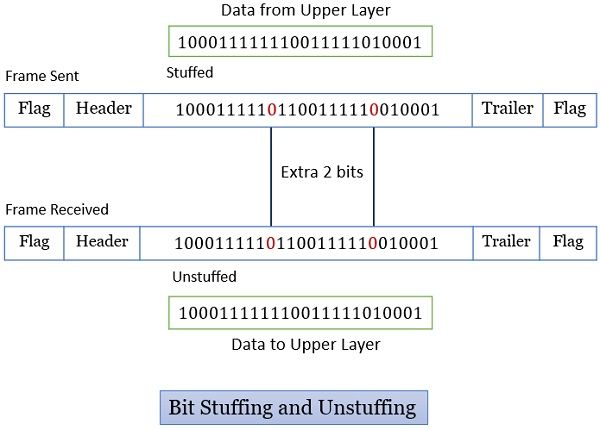 Here, if the data link layer identifies 0 and five consecutive 1’s, then an extra bit 0 is added to it. When the receiver receives the frame, it removes the extra bit.

After marking the start and end of the frame, the design issues that we have to address are how to ensure that all the frames have arrived at the destination in the proper order and only once.

What if the frame gets loss due to some hardware issue, such as a noise burst?

In such a case, even the receiver will not provide positive or negative feedback as it has not received any frame. It may also happen that the frame has been received properly, but the acknowledgement gets the loss.

In such a scenario, the sender will keep on waiting for the acknowledgement, either positive or negative infinity. We introduce a timer into the data link layer to resolve this issue.

Now whenever the sender sends a frame, it starts a timer. This timer is set to expire after a long interval such that the time is enough for the frame to reach the destination, get it processed there, and let the acknowledgement propagate back to the sender.

In normal cases, the sender will send a frame and start the timer. The frame will reach the destination, and the acknowledgement for the same will propagate back to the sender before the timer expires.

But what if the frame or acknowledgement is lost? In such cases, after the timer expires, it alerts the sender about the potential loss. The sender will simply resend the frame. But the issue doesn’t get resolved here. What if the receiver receives the same frame more than one time? To settle this issue, we can assign a sequence number to the outgoing frames to distinguish between retransmitted and original frames.

Thus, involving the timer and sequence number ensure that each frame reaches the network layer of the destination machine exactly once. The next design issue of the data link layer is flow control.

It may happen that a sender sends the frame at a faster rate compared to the rate at which the receiver can receive the frames. Well, this may be the case where the sender is running on a much faster machine than the receiver. So how to resolve such a design issue?

In such a situation, even if the transmission is error-free, it may happen that the receiver is unable to handle the frames at a faster rate and may lose some of them in the process.

To prevent such a situation, we have two approaches:

This approach limits the rate at which the sender can send the data so that it does not overload the receivers with the frames.