The wired LANs make use of standard wires and cables to connect the end nodes of the network. The wireless local area network does not use wire or cable to establish connectivity between the nodes instead high-frequency radio waves are used to connect the devices in the network.

In the section ahead, we will discuss two techniques that we use to implement the wireless LAN that are IEEE standard 802.11 and Bluetooth. We will also discuss the architecture of both techniques. So let us start with IEEE 802.11.

IEEE 802.11 is a communication standard for wireless LAN, it defines two layers i.e., physical layer and data link layer which are the first two layers of the OSI model. Let us discuss the architecture of wireless LAN.

The basic service set is the basic structure of every wireless LAN. The main components of BSS are stations which can be stationary or mobile stations and the access point which is a central base station. The access point is optional in BSS.

The basic service stations can be further implemented in two ways:

The basic service set which does not have an access point is referred to as an ad hoc network. The stations in the Adhoc network can’t send data to the stations on other BSSs. This kind of network is a stand-alone network. 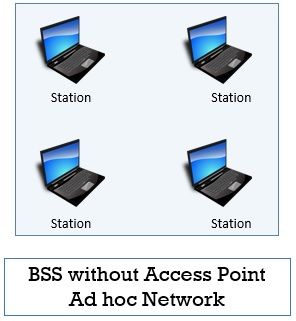 As in the ad hoc network, there is no access point so to create a network the stations identify and locate themselves to one another. 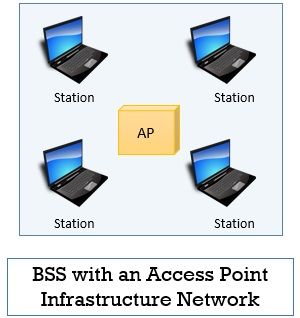 For example, your home or office Wi-Fi network.

The extended service set is a set of two or more BSSs where each BSS compulsorily has an access point. Here all the BSSs are connected to each other using the wired LAN which connects the access point of all BSSs. 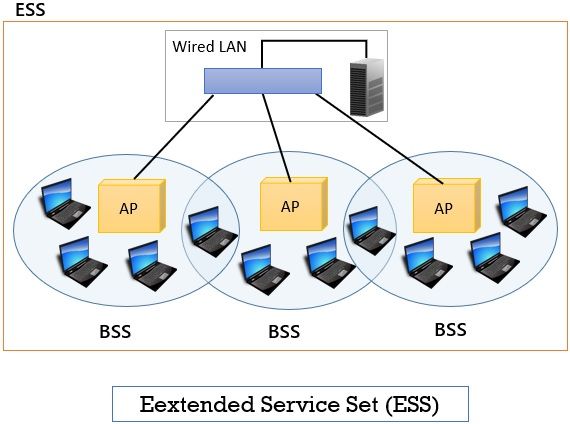 Discussing all this let’s see how many types the stations can be:

Bluetooth is another technique to implement wireless LAN but of a very short range. This technique connects the devices that have different functional capabilities such as mobile phones, cameras, printers, speakers, and so on.

Bluetooth is an ad hoc kind of network that can be made spontaneously where the devices/gadgets/end nodes locate each other, agree to make a network, and create a network. If one of the devices in the network has the capability to connect with the internet then Bluetooth LAN can be connected to the internet.

The Bluetooth LAN can be classified into two types of network:

Piconet is a small range network that has eight active stations. Among these eight stations, only one station is the primary station, and the rest stations are secondary stations.

Scatternet is a combined net created using several piconets. Here a secondary station of a piconet serves as the primary station for the other piconets. 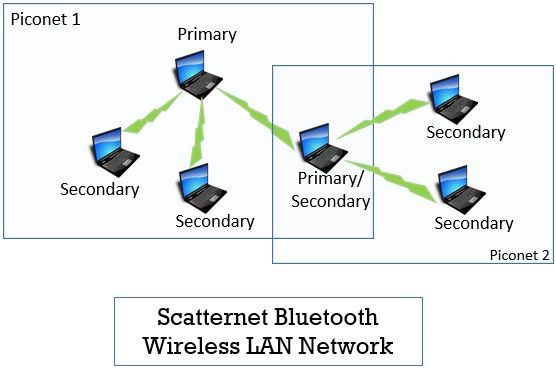 The Bluetooth network operates at the frequency of 2.4 GHz and can transfer the data at the speed of 1 Mbps.

The wireless networks are reliable and convenient but it has the possibility of interference. When two devices try to operate on the same frequency interference occurs which not only degrades the quality of the signal but also reduces the range of the device.

The other reason for interference to radio waves are the metallic substances that have the ability to reflect the radio signals. Even materials with high density are harder to penetrate.