In particular, the system software is responsible for translating the need of users into a form that the computer can understand. Let us explore more about system software.

What is System Software?

Today’s modern computer has a faster processing speed, large memory, advanced input-output devices, and is even capable of networking. However, to utilize computer functionalities, we must instruct computers with machine language. Machine language includes instruction in the form of strings of 0s and 1s.

Although the computer understands the machine language, it is difficult for the user. Thus, we require an intermediary that can transmit the user requirement to the computer in a form that the computer can understand. This intermediary is nothing but system software. Usually, the software can be of two types.

Application software is the one written by individual users to accomplish their computational requirements.

System software is one written by the manufacturer or by the system administrator to make the system convenient for use.

System software act as a bridge between user and computer. It translates the need of the user to the computer in a form that the computer understands. Thus, it lets the user program gets executed on the computer.

A computer has several resources, and one user program does not utilize all of them at once. In this case, the unused resources remained idle while some resources were serving the user program. System software allots these idle resources to some other programs. The system software interleaves the execution of all programs. In this way, it provides services to many programs simultaneously.

With system software, the user need not know about the details of how the machine works internally. 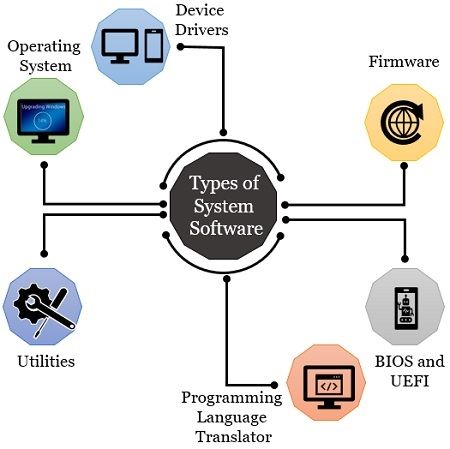 In addition, the system software also performs other tasks that the user is usually unaware of. Like, preparing a program for its execution, this requires:

Consequently, the system software provides a user-friendly platform that allows users to develop their own programs. If we broadly classify software in a computer can be of two types.

Manufacturers or system administrators develop system software as an integral part of the computer. Its features are:

Although the system software can be of various types but let us discuss some of its major categories.

In short, it does all to create an environment where the user can execute programs (application programs) easily. If we categorize the task of the operating system, then it will be:

A compiler is also a system software that is responsible for compiling (converting) a program from its source language to the target language. It includes a series of phases, as discussed below.

Assembler is a system program that is responsible for converting the assembly language code into the machine language code.

In the case of large projects, the developers develop entire software into separate modules. These modules can be compiled/assembled separately with little or no information about the other modules of the software. But it is the linker that combines all to modules together to develop a complete software.

A loader is system software that brings the executable file present in the secondary memory to the primary memory for its execution. In today’s modern computer, the loader is implemented as a part of the operating system itself.

In the case of large projects, the developers develop entire software into separate modules. These modules can be compiled/assembled separately with little or no information about the other modules of the software. But it is the linker that combines all to modules together to develop a complete software.