The point-to-point WAN is a kind of network that establishes a connection between two remote devices using a leased line that is meant for public networks such as telephone lines. In this section, we will discuss the technologies that are used to create a point-to-point WAN network. 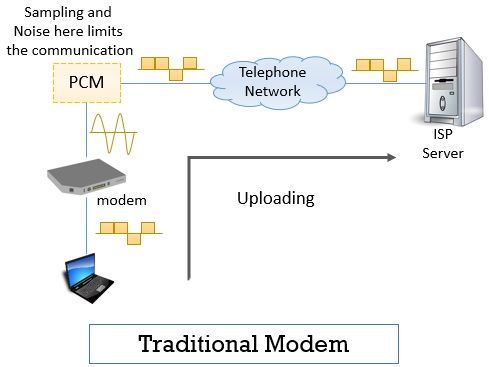 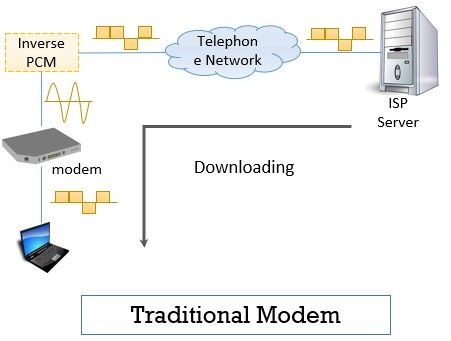 The modem V.90 and V.92 are the traditional modem which has a data transfer rate of 56kbps.

To improve the data transfer rates, telephone companies came up with a new technology DSL i.e., Digital Subscriber Line. DSL is a set of technologies that provide high-speed digital communication through the local telephone line.

The DSL set is represented as xDSL where x can be A, V, H, or S.

The business user needs to send and receive a large volume of data. So, we require a technology that provides high-speed transmission while uploading as well as downloading. The uploading speed in ADSL is 64 kbps to 1 Mbps and the downloading speed is 500 kbps to 8 Mbps.

The symmetrical digital subscriber line divides the available bandwidth equally for uploading and downloading streams. The SDL technology is suitable for business users who need to transmit a large volume of data.

The HDSL transmits and receives a large volume of data. In HDSL technology the available bandwidth is divided uniformly between upstream and downstream. It was introduced as an alternative for T carrier line T1.

The VDSL technology transmits data at faster rates. It is similar to ADSL in the sense that it has a larger downloading speed as compared to uploading speed.

The conventional cable modem transforms the analog signal from the telephone line to the digital signal and vice versa, similar to the DSL modem. But cable modem is comparatively a complex device. The DSL technology uses the traditional telephone line for data transmission which is prone to interference.

The cable modem uses the cable TV line to connect your computer to the internet service provider (ISP). The cable line transmits the broadcasted video signals to the subscriber’s site.

A community antenna is set up at the top of the hill or at the top of the building which is also referred to as head-end or a cable TV office. This antenna receives the video signals from the TV stations and distributes these signals to the subscriber using the coaxial cables.

The traditional coaxial cable was susceptible to attenuation which requires the use of a large number of amplifiers. This leads to only one-way transmission i.e., from the head end to the subscriber’s site.

Now let us see the working of the cable network.

The cable modem is installed at the subscriber’s end which is connected to the Filter which filters out the broadcasted video signals for your TV and internet traffic for your computer.

The synchronous optical network (SONET) is a set of standards that define synchronous data transmission over a high bandwidth optic cable. With this technology, multiple digital data streams are transmitted over the fiber optic cable at once.

Point to point protocol (PPP) was designed to manage the transfer of data using telephone lines or cable lines. Using this protocol a single user can be connected to the internet through a telephone line and standard modem.  This point-to-point protocol defines only the first two layers of the OSI model i.e., the physical layer and the data link layer.

With point-to-point protocol, there are no specifications about the physical layer, the implementer can use whatever is available to him. When PPP is handling the link, it uses Link Control Protocol (LCP). The link control protocol is used to establish the link between the nodes, maintain the link and terminate the link when communication is over between the nodes in the network. To control the data transmission between different network protocols, PPP makes use of network control protocol (NCP).