Null Value in SQL is the special value, allocated to an attribute in a relation that indicates, the information regarding the corresponding attribute is either unknown or doesn’t even exist. In this section, we will discuss the null values in detail.

What is the Null Value in SQL?

The null value assigned to an attribute in a relation specifies that the value for the corresponding attribute is either:

When a new attribute is added to an already existing relation using alter table command then all the tuples of that relation initially have a null value for that newly added attribute.

Allocating null values to attributes make a relation difficult to handle. It is preferred not to make frequent use of them as they create difficulties when we access or update the database. In the further section, we will discuss the problems with null values.

How does SQL treat null values?

The null values create a problem while performing a relational operation that includes arithmetic operation, comparison operation and set operation.

If any arithmetic expression including these (+, -, *, or /) operators, have any of the input as null, will evaluate the result in null. For example, if we have to increment the salary of all the instructors by 100 $ then the expression would be:

The case is worse in comparison operations. Consider, if we have a comparison (1<null). Now, how could you judge that the comparison will turn out to be true or it would be false? This is because we don’t know what does null value exactly represents.

It may happen that the predicate in where clause includes Boolean operations to combine the results of comparisons. Therefore, the definition of Boolean operation must be extended in order to deal with the logical value ‘unknown’.

Let us see how Boolean operations (and, or, and not) treat unknown:

not:
not unknown = unknown

In the predicate, the comparison between null i.e. null=null returns ‘unknown’ instead of ‘true’. In case, the predicate in where clause evaluates the result as false or unknown for any tuple in a relation. Then that tuple is not counted in the result.

In SQL, ‘is null’ is used to test the predicate for the null value. For example, if we have to check for all those instructors who have their salary value equal to null in the instructor table below: 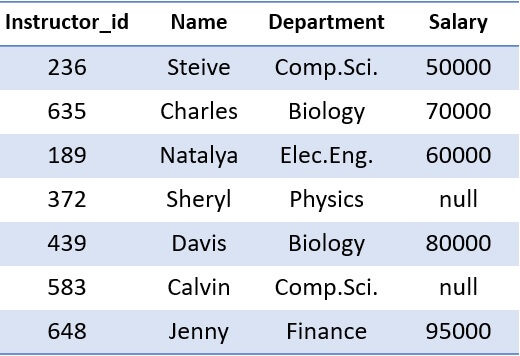 The query for this would be:

select name from instructor where salary is null;

As you can see in the image below this query will present the list of all the instructors who have a null value for the salary.

Is Not Null Operator

Let us see the performance of ‘is not null‘ for the same query. Is not null is also used to test the predicate for the non-null values.

select name from instructor where salary is not null;

Now, this query will list all the instructors who have non-null value for their salary. 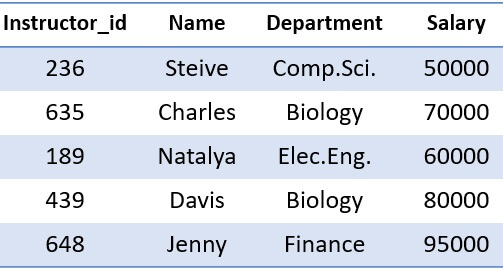 In the set operations, two tuples are treated as identical, if the values for corresponding attributes of both the tuples are either non-null and equal in value or if both are null.

For example, we have two tuples:

How to Insert NULL Values in SQL?

This will insert an instructor instance with id 164, name Shovel, department Physics and his Salary attribute is assigned a NULL value.

How to Replace the NULL Values in SQL?

Well, you can always replace the NULL value of an attribute with a specific value using two SQL functions such as ISNULL() or COALESCE(). Let’s take the instructor table shown in the figure below has three NULL values for the attribute Salary. 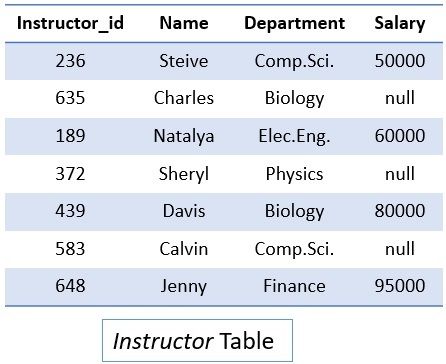 Now if we want to replace the NULL value in the Salary column with the string “Not Decided” then we can do it using the ISNULL() function. Observe the command below:

The command above will display the result as: 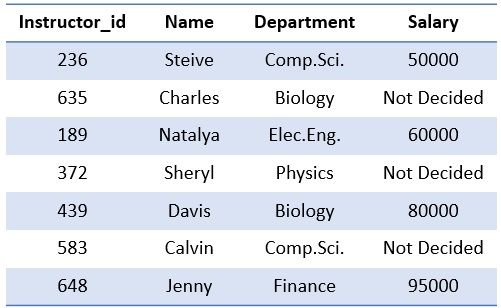 For replacing the NULL with some specified label you can use the COALESCE similar to ISNULL such as:

This query will produce the same result as above ISNULL. On the other hand, the COALESCE function returns the first non-null value from its arguments. For Example:

So, this was all about the null values in SQL, we have seen the definition of null, how SQL treats problems raised due to null values. We have also seen the variation in results evaluated when the predicate is containing ‘is null’ and ‘is not null’. We have also learned how to insert and replace the NULL values.