What is ER Diagram?

ER diagram is designed on the concept of ER model. It provides a graphical representation of entities, attributes and relationships. The ER diagram helps many users even non-technical users to understand the logical structure of the overall database.

In software engineering, the ER diagram is used at the initial stages of the planning of software. It helps in identifying the requirements of the information system, the system elements involved and the relationship among them. The ER diagram can also be referred to create a data flow diagram i.e. DFD that explains the workflow of a software.

The three main components of every ER diagram are entities, attributes and relations. These are the building blocks of the ER diagram. Let us talk about each of them:

The values of the attributes define the characteristics of that entity that helps in identifying the object uniquely. The entities sharing the same set of attributes are collectively stored in the same entity set.

The entity set can be further classified into two types:

Each entity set in the database is defined with some set of attributes that describes the characteristics of each entity of that entity set. The attributes can be further classified into: 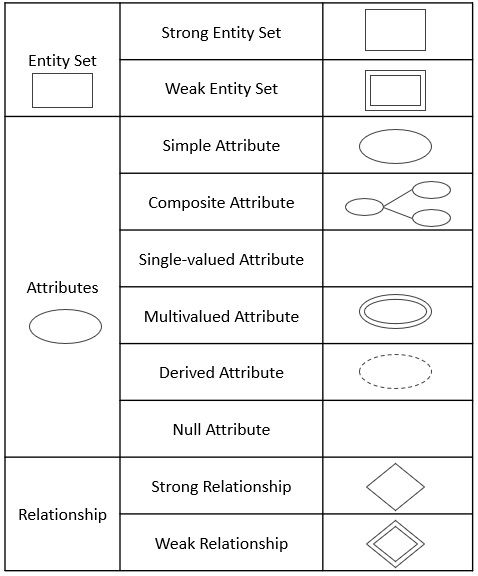 Now learning about the building blocks or components of ER diagram let us draw an ER diagram. Before you initiate drawing the ER diagram you must focus on some basics.

Now consider a scenario of a bank where a customer comes to withdraw or deposit some amount or to take a loan. So here spontaneously we figure out two basic entity sets involved in the system are the customer and the bank. However, the relationship between the entities customer and bank could be withdrawal, deposit, loan.

The attributes that can describe more about the entity set bank are bank_name, address, branch, affiliation_no. The attributes of the entity set customer are customer_name, account_number, address. The figure below shows you the basic ER diagram of a bank transaction system. 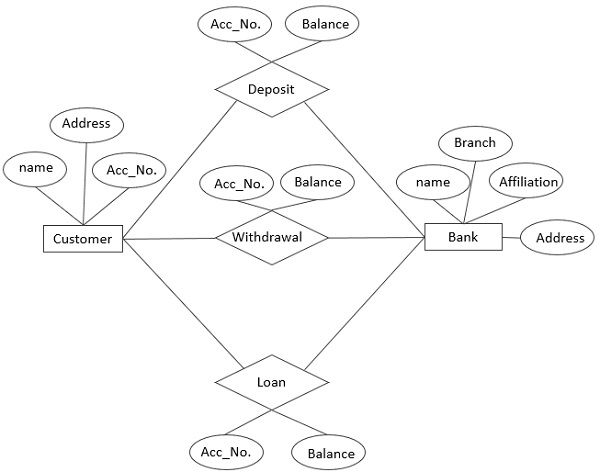