Earlier there were no such organizations or committees that can define the internet standards. However, people around the world were doing their own thing to establish worldwide communication. This raises the need for standards that can be accepted across the world.

While working on ARPANET the Department of Defense (DoD) set up an informal committee i.e., the Internet Activities Board (IAB) which works to set up a network of the connected computer so that they can share their findings. This would also reduce and even eliminates the cost of duplication effort.

The acronym of IAB was modified to Internet Architecture Board (IAB). The IAB consisted of approximately ten members where each member was assigned a task, which they used to report to DoD. DoD and NSF used to raise the fund for IAB.

Whenever a new standard was required the members of IAB use it to discuss the requirements and announce this to the software graduate students to implement it with the help of coding. The communication between IAB and students was achieved with the help of series of online technical reports i.e., RFCs (Request For Comments). These comments are organized in serial order online and can be fetched by anyone who is interested in them.

With the continuous growth of the internet, IAB was reorganized in the year 1989. It was repopulated to form an organization which was then split into two groups, IRTF (Internet Research Task Force) and IETF (Internet Engineering Task Force). IRTF is held for conducting long-term research and IETF is held to handle short-term issues.

This is how the Internet Society (ISOC) was formed which thoroughly test and approved the proposed internet standards.

Just now we have seen the formation of ISOC (Internet Society). Well under ISOC there are various groups that coordinate to create and maintain the internet standards. In the figure below you can see the organization of all the groups under the ISOC. 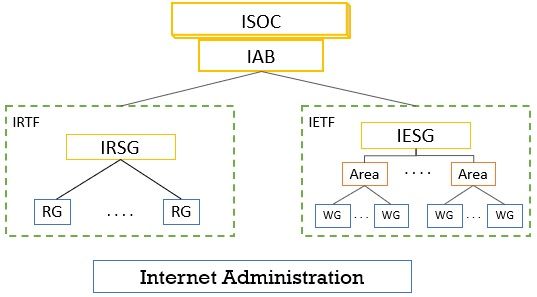 The ISOC is an international organization that thoroughly test the proposed specifications before it is realized into the standard. Several administrative bodies such as IEFT, IA, etc. work cooperatively under the ISOC which is responsible to address all the issues that decide the future of the Internet. ISOC encourages scholarly activities and research in the field of the Internet.

IETF tackles short-term engineering problems subjected to the Internet. The working groups under IEFT are managed by the IESG (Internet Engineering Steering Group). The IEFT identifies the problems on the Internet and proposes a solution to resolve the problem.

IETF also reviews the proposed specifications which are capable of becoming the Internet Standards. Each working group is assigned a specific topic. The context of the assigned topic can be divided into nine categories such as application, Internet protocols, user services, Internet operation, routing, network management, transport, Internet protocol next generation, and security.

Studying the organization of Internet administration lets us study the process which every proposed specification must undergo before declared as an Internet standard.

In the figure below we can observe level by level maturity of Internet standard. 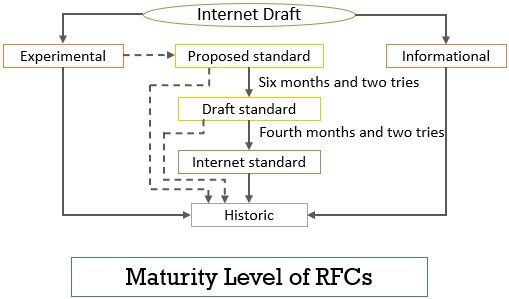 A specification or statement or a working document is considered as an Internet draft that has no official status and has a lifetime of only six months. Upon approval by some Internet authorities, the Internet draft is published as Request for Comment (RFC). The RFCs are assigned a specific number and are available online for people interested in the Internet.

Every RFC before gaining the status of standard falls at least into one of the maturity levels below.

The published RFC is classified as informational if it is consists of any kind of information regarding the Internet. Usually, they put forth by non-Internet organizations such as vendors.

The RFC specification is classified as a proposed standard if it is well defined and has the work which seems to be of the Internet community’s interest. The specification here is examined and implemented by the different groups.

Two successful implementations independent of each other and still interoperable promotes the proposed standard promote it to draft standard.

Validation of successful implementation of a draft standard elevates it to Internet standard.

The RFC itself can be of five different kinds on the basis of requirement.

The RFC is considered as required if it is mandatory to implement on all Internet systems to check whether it meets the specified standard. For example, ICMP an IP

The RFC is considered as recommended if it is useful but is not mandatory to implement it on all Internet systems to check whether it meets the specified standard. For example, FTP and TELNET

The RFC is considered an elective if it can be used by an Internet system only for its own benefit.

The RFC is considered limited if can be used only in a limited situation. The RFC that are classified as experimental in maturity level is limited RFCs.

The RFC is not meant for general use is not recommended RFC. Historical RFCs fall in this category.